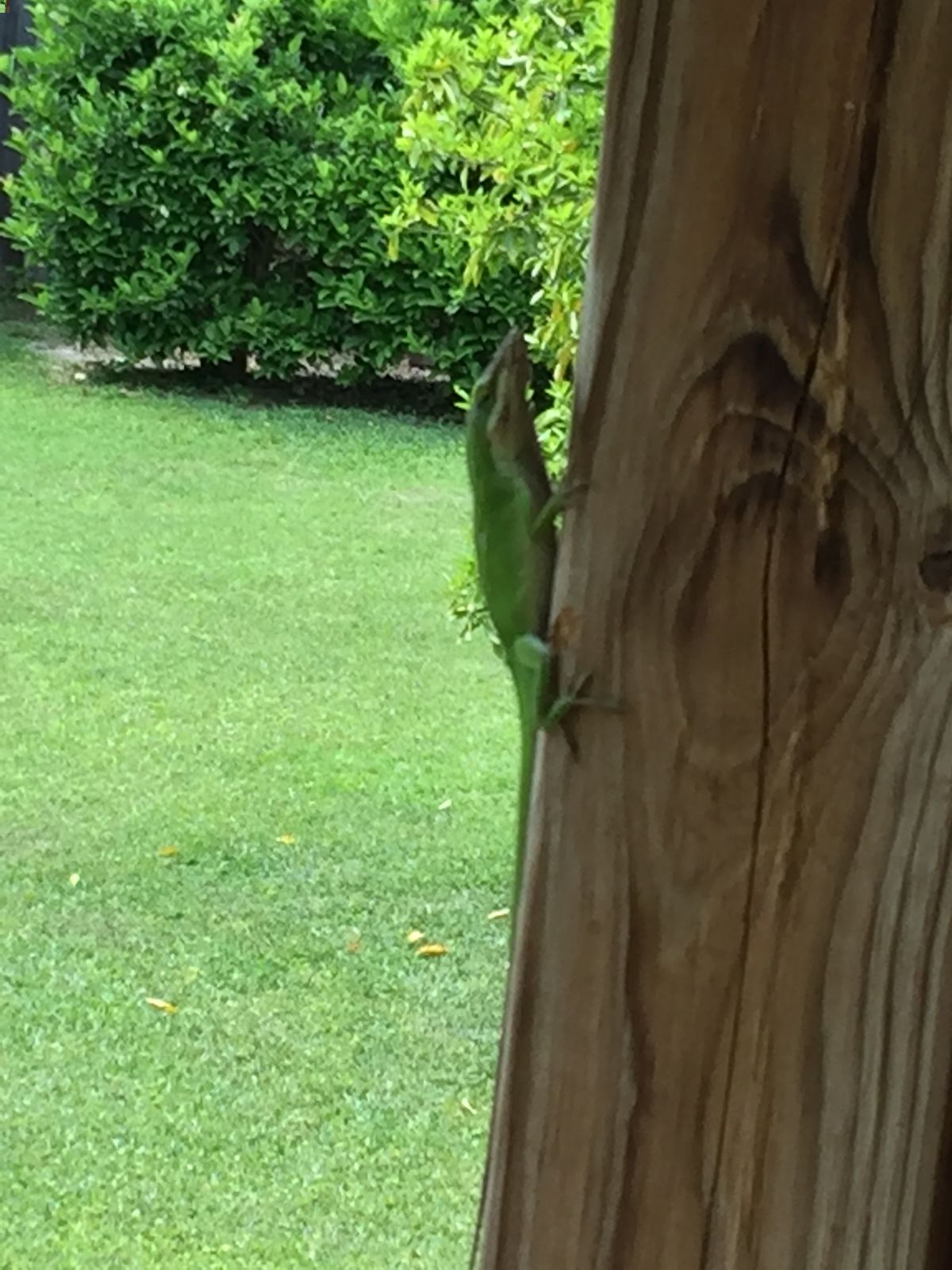 Sitting enjoying the last few cool days of Spring, we spotted this on a post, and had to sit a while and watch it play out because there was another one on the other side of the post. We imagined there would be some science fiction, Godzilla-type, fight to the death, bad B-Movie scene about to play out.

My first impulse was to squoosh him (yes, squoosh is a word…because I said so), but I was told off by Thom because they’re so good for the environment, eating mosquitos and so on. So Sochi the Chameleon (I named him), was allowed to live, and demonstrated what a chameleon he is, changing his looks and probably communication, to blend in with his momentary surroundings.

I’ve often wondered about social chameleons. Is it a good or bad thing to be able to fit in comfortably in any situation? Sometimes that strikes me as hypocritical, because there are some situations that are just uncomfortable and one should be uncomfortable if one’s conscience is active.

But, as Thom commented yes, a White (or black, brown or green) Supremacist group should make you uncomfortable, but how many of us put ourselves in situations so extreme?

So what’s a social chameleon, and is it a good thing?

A social chameleon can fit in, adapt and feel comfortable in whatever situation they find themselves in . I’ve decided it is a good thing, as long as one personality and belief/value system is maintained in all situations.

For example, if you had a dinner party and the folks with whom you attend church showed up, and your work colleagues and your socializing buddies, and your siblings too (assuming your spouse is already part of the dinner party), would they all say you’re acting like yourself?

Or would you not know which hat to put on when those worlds collide in your dining room?

Some people only surround themselves with folks who think, vote, act, (or act out!) believe or look like them. Because they don’t want to have to change anything for anyone to feel comfortable.

It makes for a small world. Or should I say a small bubble, when we choose to create them for ourselves and then live within them.

We should be able to adapt to people different from ourselves, and still act like ourselves and be respectful, kind, polite and gracious, even in disagreement. It pains me to see a society for whom the love of diversity is no longer the norm. Such a shame to see us surrounding ourselves, whether intentionally or not, only with like-minded people. Or even worse, acting like one person in one setting and a whole different person in another setting. Acting is probably the operative word, there.

So, that’s my two-cents and a tuppence for the day. Who knew that a social chameleon named Sochi showing up on a post would birth such thoughts.

Long live Sochi and the social chameleon in all of us.