Should you say something…or look away? 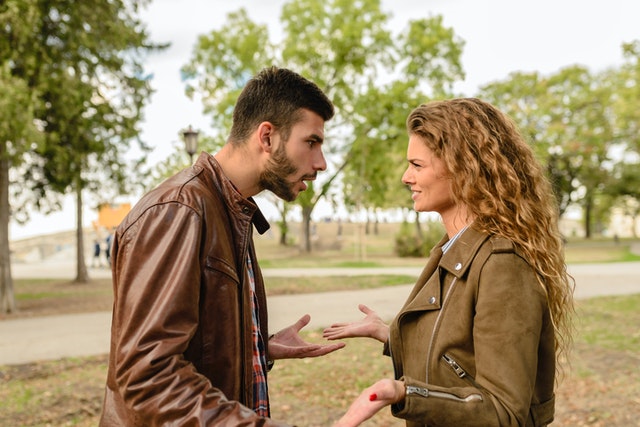 My friend and I were sitting in a sandwich shop, having stolen an hour from the day to connect, laugh, solve the problems of our universes and contribute to the daily nourishment of our bodies.

Towards the end of our stolen hour, I became aware she was no longer engaged in my fascinating story, her eyes were firmly focused on someone over my shoulder.

I didn’t turn my head but asked “you ok?” She nodded and said, “sorry, continue..” I continued… she was again distracted with the scene behind me, over my shoulder. It was a noisy place and I didn’t hear her the first time she said “he’s shouting at her”. Then she said it again, leaning in to me to make sure I heard. “Who’s shouting at who? I enquired. With the background chatter, the ceiling music, chairs scraping on the floor, I couldn’t hear who was making my soft spoken Southern friend become visibly alarmed.

I turned my head to see a man, animated, veins blue in his neck, glaring eyes as he spoke loudly at his table mate. I couldn’t hear what he was saying, or see his female lunch mate’s face. He seemed oblivious to us looking at him. My friend said “he’s yelling about someone and what they said to him, must be a work issue”. We sat in awkward silence for a second, my fascinating story no longer quite so fascinating to either one of us.

“She’s leaned back in the chair, with her arms folded…now she’s holding up her hand and told him to stop”. My friend is giving me a second by second account of the drama at their table. I looked at the tables around, busy patrons eating lunch, seemingly unaware of this scene unfolding behind me. I turned – not just my head, but my entire body so as to fully focus on the man and allow him to see me watching him. He was oblivious to me and continued his tirade.

“I have to go” my friend said. Lunchtime was up and it was time to return to our respective jobs. We stood, walked past the table. I stopped and stood slightly behind the man’s shoulder and turned to look squarely at the woman. My friend stood next to me. After an awkward few seconds the woman looked at us – perhaps our shadows blocked the light from their table, “you ok?” asked my friend. The man continued to talk at her. I pointed at him. She suddenly seemed aware of the scene she was in. “Oh yes”, she said confidently, “I’m fine” as she glared at him and gave him the 2-palm Stop sign.

My friend and I exited the cafe. In the car, she pondered aloud whether she should have administered a headlock and put him to sleep. I pondered whether I should have given him a swift kick to the head. With our 20/20 hindsight intact, we thought of a couple more scenarios in which we were the WonderWomen Heroines and the dastardly bully lay, incapacitated on the floor.

Should we have been silent? Or was it fortuitous that we were there for such a time as that lunch hour? Should we have been like the WonderWomen our hindsight encouraged us to think we were and sprung into action? It’s a difficult scenario and I’m sure we’ve all been there before.

While I’m sure the woman was ok, she seemed to be holding her own, and she seemed thankful we stopped to make eye contact and speak, I’m not so sure we did the right thing in that moment.

Did you say something – or did you look away?