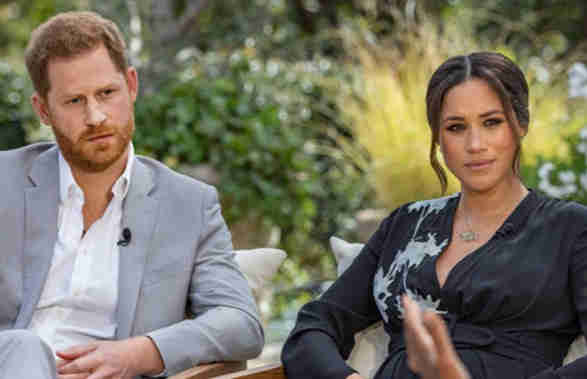 I watched the Oprah interview live on Sunday night. Then I read the scoop for the Monday night live- airing in Britain. On Tuesday I read the fallout. On Wednesday a breakfast TV anchor had quit over it. On Thursday a formal complaint had been filed. By Friday, I wanted to put my head under the pillow and pretend I’d never heard of Meghan Markle or Prince Harry, for that matter.

So really, why all the kerfuffle?

There are some that believe that Meghan is part of the long-buried plan of King George III (yes, the one from the 18th century) to get an American married into the Royal family so as to reclaim America as a colony. Conspiracy theories abound all around us, don’t they?

Some think Prince Harry has been wanting to leave Britain for a very long time, and simply found a wife that was willing to help him do that, and take the “blame” for it so that everyone would still love Harry. Ah, yes, the villainess. Somehow, it’s always the woman to blame. It started in the Garden.

Others think Meghan married above her station and when the pressure got to be too much, she bailed, running back to her hometown, having gained global acclaim and wanting to keep all the perks of being Royal.

Still others believe Meghan is a lovely person who has been treated badly, when all she did was fall in love with a Prince (cue Hallmark movie music here).

While I do believe that Meghan was treated horrendously by the British tabloid (gutter) press, in all fairness, they treat everyone horrendously, including Diana, Sir Tom Moore and anyone else on whom they determine they have “juicy” negative information/lies to share. On behalf of decent British people everywhere, I apologize for the British tabloid press (over whom I have no control).

The fuss is all very real. It is after all, the new world marrying into the “Olde” world. Ye Olde world – where people bow before kings/queens, crowns stuffed
with colossal diamonds adorn royal heads, some live in palaces, others live in 1 bedroom flats with no garden.

The New world – one where we all get to speak our truth, and Be Real.

Except for the fact that it is logically impossible for us all to speak truth and be correct. Where there is truth, there must be falsehood. Because we can’t all be telling the truth, all at the same time. As you can tell, it makes no sense (to me) that what is true for you, may not be true for me. Truth is truth. There is a plumb line. And where exactly is that plumb line? Obviously we all disagree.

I’m not a big follower of Oprah. I’ve never been one to wear my heart on my sleeve, and many British people (my age) would agree that’s a good way to be. So maybe that’s a cultural norm, or an ageist norm. But followers of Oprah do appear to think that her philosophy of life is a good way to be. So be it. I’m a follower of Christ, so I’m not knocking Oprah personally, humans all have the choice whom they will follow.

Back to Meghan…she appears to be a kind person, based on what her friends say about her. But is it kind to cause damage to other people, just to be true to oneself?

She’s just being real. I should just be real too. But maybe the real me is a toxic waste dump. Should I have the right to dump the real me on you? This self actualization of being “true to yourself” has always sounded rather nonsensical to me. Because, after all, I am human. And what is true for me when I’m in the middle of a knock down, drag out fight with my husband, may no longer be true for me (about him) when we’re all made up and lovey-dovey again.

Me being true to myself can change on a whim, because feelings can be fickle, not all the facts are apparent all of the time, and even the facts can appear to be something else if I’m filtering those facts through exhaustion, sickness, grief or a thousand other things that make me human. Admit it, you’re the same way.

So Meghan and her New World attitude has (according to Prince Harry) tripped and fallen headlong into the British Olde World. A world where the Queen and her family, (the Firm, as we Brits have always called them) can pretend everything is fine when obviously it is not. The institution of the monarchy goes to great lengths to keep things moving along and meeting the unreasonable expectations of the public that want a monarchy that looks perfect. And let’s face it, we like it.

We like having a Royal family living a fairy tale life, wearing nice clothes and making nice speeches and bringing a bit of pomp and ceremony into our mundane, ordinary lives. The millions of people that tuned into Royal weddings, Diana outfits, parades and so on prove this fact (well, unless you’re Thom and have no time for any of it).

The idea of being the perfect family, or in a perfect marriage is very much a human construct. And we are all guilty, as humans, for playing our role in that construct. Within our own families, and by putting other “perfect” families on pedestals.

So while not a monarchist myself, I do have a lot of respect for the Queen as an individual. She seems to be a woman of integrity, a hard worker, loyal, faithful and trying her best. I like Meghan as an individual too. She appears to be kind, have worked hard, cares about the less fortunate, and used her previous fame as an actress to bring attention to important issues.

But now that the New World has crashed into the Old World, is it neccesary or kind or even true to just put it all out there on a sleeve? Did the Queen really need to be “outed” on Oprah?

I’ve had lots of “I’m just being real” conversations with my family, and my in-laws too, for that matter. But not on Oprah during primetime. If you’re a new creature, you’re not supposed to cling to the old – or Ye Olde – you’re supposed to live as new and improved, and even share the goodness and bring others along with you. A little self-restraint is a good thing, and Oprah interviews are not known for their self-restraint.

All this fuss is because the New crashed into the Olde. Meghan and Harry have managed to move away (far away) from that old life, and appear to have created a new life for their family in sunny California. Good luck to them, I say. Any newly married couple deserves the time/space to develop their family on their own terms.

So live your new life, Meghan and Harry. The monarchy is the old world, and, in my humble opinion, traditions are not always what they’re cracked up to be when they become anachronistic. But speaking your truth and Being Real in this fashion doesn’t seem to be making this New/Olde crash an orderly transition. It’s just looking like a train wreck.

Somebody, please pass me a pillow, so I can bury my head.